Previous Next
James A. Newman, an Early Tennessee Politician 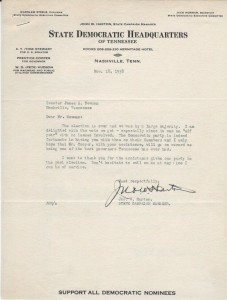 This month’s auction ending Wednesday, November 18th, is for the family of the late James A. Newman, who was born in 1892 and passed away in 1964.  He was a lawyer and an American politician and his colleagues affectionately nicknamed him “Judge” for the many times he served as a special Judge for the various courts in Nashville.

He served in the military during WWI and when he returned, he practiced law. In 1939, he was elected to the State Senate and supported a number of important measures while in the General Assembly. He was a life long Democrat, and was a staunch suppo rter of TVA. He authored a bill calling for establishment of a “non-political” electric power board and for 17 months served as general counsel for the Nashville Electric Power Board.

Mr. Newman was a founder and active member of the First Christian Church and served for a short time as minister. He resided on Eastland avenue, and we have a letter from J. Percy Priest dated December 17, 1945 accepting an invitation to Mr. Newman’s home on Christmas Day.  He was also a member of the Nashville and Tennessee Bar Association and a 33rd degree Mason.